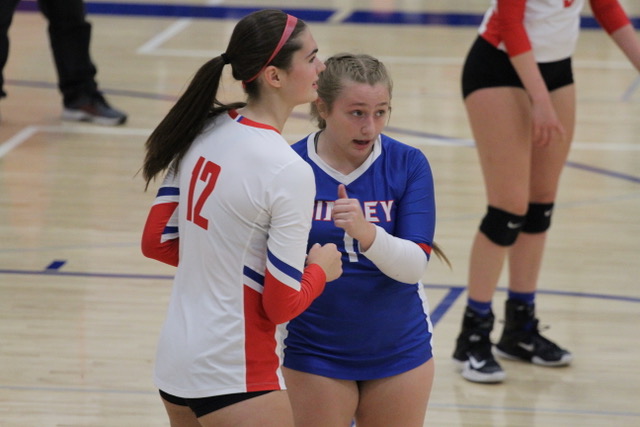 The curtain came up on the unique 2020 volleyball season with a titanic victory for the Simley Spartans at Tartan on Thursday, October 8th. The gym may have been empty of fans, but you could have filled it with the hearts of the Simley squad as they battled from the opening point to match point in set five coming away with a 25-13, 18-25, 25-22, 25-27, 15-12 nail-biting win. Both teams reached deep, but it was the Spartans who fought off a rally by the Titans in the middle of the deciding set, highlighted by Junior Bella Studer’s two aces in a five point run for a 12-7 lead that Tartan could not overcome. All 12 Spartans saw action and contributed to the win. Senior Abby Hepper displayed serving acumen with 6 aces, soft hands with 17 assists, and added 6 kills and 6 blocks to the mix. Setting partner Junior Lauren Tuccitto contributed with her own 17 assists and two crucial digs in the final set. Junior Chomp Danso stuffed the Titans set five rally with a timely kill and later with a strong block for the penultimate point of the match. Returning defensive nuggets Seniors Brynn Rogers and Molly Stein anchored the back row, as Rogers dug 18 of 19 Tartan hits, while Stein was merely 100% in her digging attempts. Moving to the new position of outside hitter following her return from a one season hiatus in California, Junior Aadriana “Double A” Epps contributed mightily with double digit kills, most of which came in the Spartans winning sets. Ex-nugget Studer added 13 kills in the other outside position. In her first varsity start, Sophomore Naomi Romslo showed no opening night jitters with bookend 7 kills and 7 blocks, while Freshman Avery Renslow, also in her first start, was steady with 4 blocks and no hitting errors. Both new middle hitters played fearlessly in the varsity cauldron. Juniors Malia Miller and Joana Jimenez both played solidly in their varsity debuts, contributing to the team’s victory, while probationary nugget Freshman Makayla Goldschmitz saw action in in the last four sets of the match and was only perfect from the serving line. Simply a wonderful start to the 2020 volleyball season for the Simley Spartans.