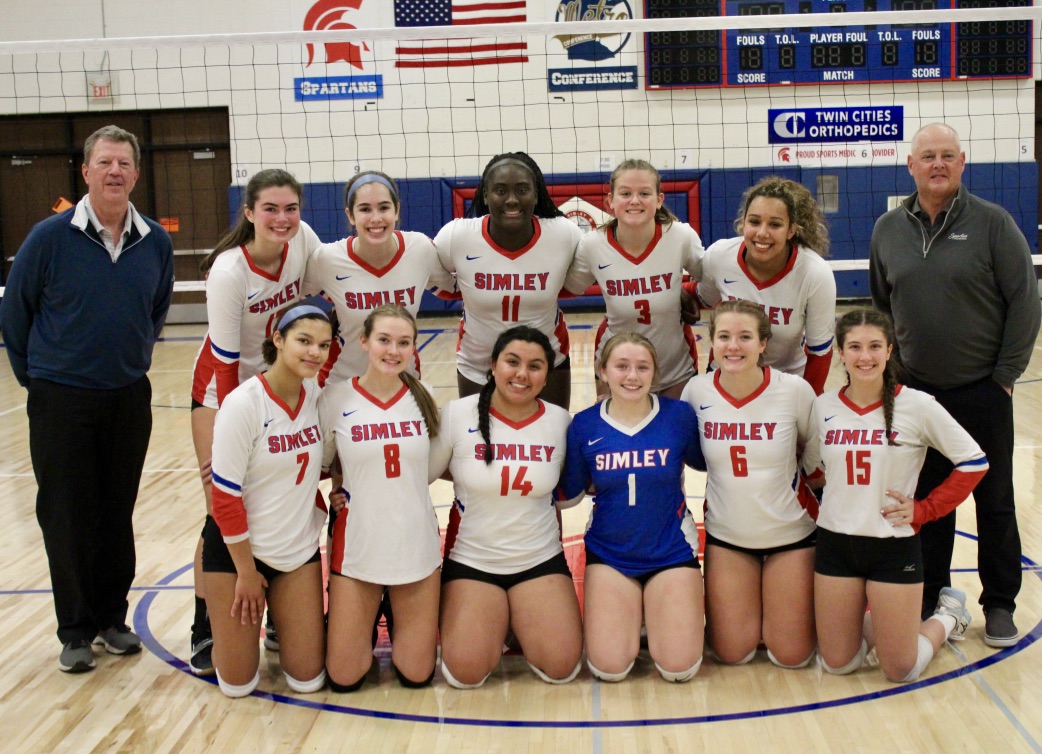 Capping a wonderful season, the Simley Girls Volleyball team defeated North St. Paul in a rare season-ending Friday contest on November 20th. The Spartans fittingly closed out the 2020 campaign at home winning in four sets (25-13, 22-25, 25-17, 25-13) and played an almost perfect night of volleyball, although the players could not resist taking one last opportunity to annoy the coaches in set two being congenial hosts to the Polars. In their three winning sets, however, the Spartans were impressive sending out their seniors in the same superb fashion with which the team played all year. Admittedly a victory in the final match of any season is always a bit bittersweet, especially to our graduating captains, but smiles and laughter and excitement were the order of the night.

Simley’s juniors were strong on Friday. Chomp Danso was again a force on the right side shutting down the Polar’s outside attack with devastating blocks and simply forcing hitters to adjust their attack. Aadriana “Double A” Epps extended her offensive improvement with another night of double-digit kills. Joana Jimenez was a rock in the back row on defense and serve receive to dishearten NSP. Malia Miller continued her evolution as a volleyball player (after escaping her misguided youth as a soccer player) with kills and a big-time block. Bella Studer brought her full complement of volleyball skills hitting .414, digging 75%, serve receiving at 2.17, throwing in two aces, and adding an assist for good measure. In her last match as an honorary Nugget, Lauren Tuccitto merely dug 80%, passed at a match-high 2.40, and served 100% again scoring the most serving points of the night for the Spartans.

Our lone sophomore, middle hitter Naomi Romslo, was outstanding as the Polars’ blockers and back row defenders had no answer as her 15 booming kills rained down. And the Spartan freshmen would not allow themselves to be overlooked. Makayla Goldschmitz served 90% with an ace, was stingy to North on defense, and was unwavering on serve receive. Avery Renslow simply had her best match of the season with 9 kills in only 13 attempts and anchoring the team’s front row defense with a game high blocking total.

And then there were the senior captains. Molly Stein may have been home screaming at the livestream (a big shoutout to Gretchen Schwanz & Mikayla Hensch for running the livestream and for Gretchen’s insightful commentary), but she was in all our hearts. Molly had a marvelous senior season leading the team digging 83% of attacks coming her way, serving 92%, and serve receiving well above the excellent 2.0 level. As in the rest of her career, Molly had a run when she was out of position probably once during the 2,000 points of the season. Brynn Rogers had another great match prowling the back row from corner to corner digging 82%, receiving serve at 2.17, serving at 93%, and simply frustrating the Polars hitters all night long. Abby Hepper closed out her Simley volleyball career with another wonderful all-around performance with 3 kills, digging 75%, serving 100% with a couple of aces, and a whopping 40 assists in just four sets. The impact of Abby, Brynn, and Molly cannot be overstated. Their influence will long be felt and will prove once again that “Tradition Never Graduates.”

Friday’s victory raised the Simley’s record to 9-2 in the Metro East Conference. To say that other conference teams were surprised by the level of play of the Spartans would be an understatement. To say anyone associated with Simley Volleyball and these players was surprised would be wrong. Let’s just say that about an hour into the first practice way back in September the coaches looked at each other and smiled. The season ended with great results because of the leadership, work ethic, belief, and joy evidenced in the gym every day. The season ended how it began, with 12 young women who committed to each other, who trusted each other, and who loved each other.