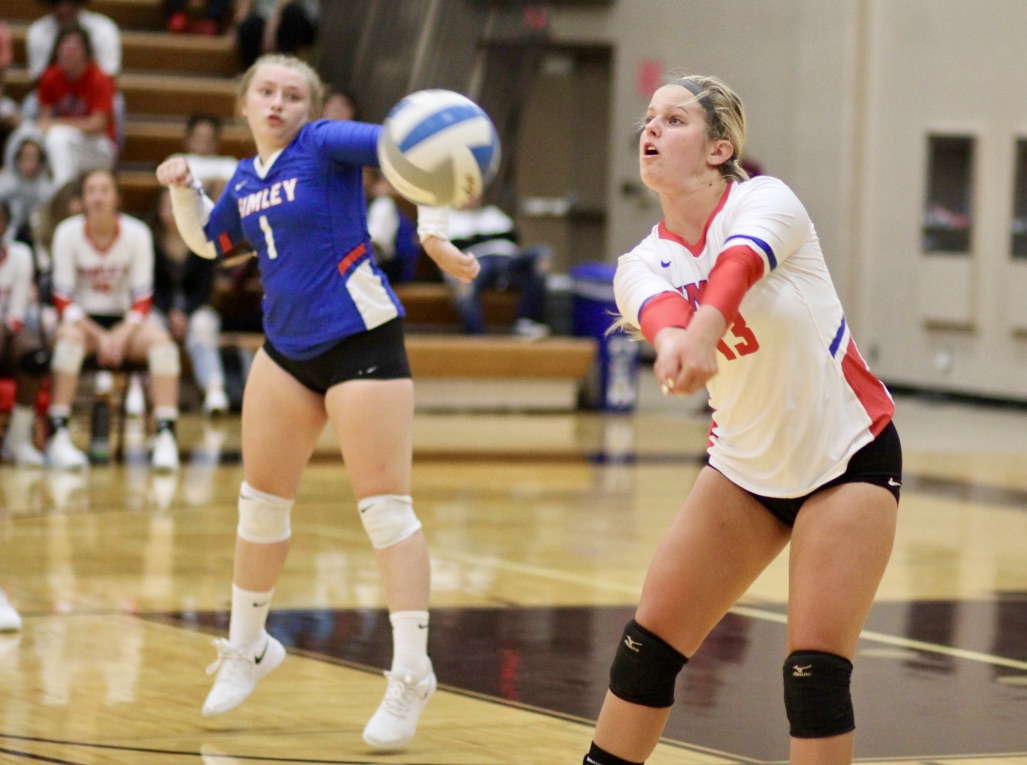 Congratulations to the Simley Girls Volleyball Team for its outstanding finish at the Benilde St. Margaret’s Invite on Saturday, October 5th. Signaling poor coaching preparation, the 2019 Spartans have a hard time getting going in the early morning, much like the preceding 1974-2018 Simley volleyball teams. Opening the tournament with what should have been a comfortable warm-up match against DeLaSalle, the team hemmed and hawed its way to a 2-1 set win finally playing typically strong Spartan volleyball at the end of the third set. The second match of the day saw conference rival Mahtomedi bow to the rapidly waking-up Spartans who dominated the start of both sets for a cozy double 25-14 bookend victory. An extended break allowed the team to fuel and prepare for its toughest match of the day versus highly ranked Centennial which featured a strong attack in all six rotations – much like Simley’s offense. The Cougars were clicking on all cylinders in the first set and won easily 25-17. The Spartans always respond strongly to a challenge, however, and were determined to prove to themselves they could compete at Centennial’s level and played one of their most competitive sets of the season and won the second set thrillingly 29-27. The third set saw both teams play at a high level until the Cougars pulled away at the end for a 15-11 win sending Simley immediately into the third-place match against New Life Academy. The Eagles feature an outside attack with two tremendous hitters who have been the main reason New Life has made the State Tournament the past two seasons and who are expected to do so again. The Spartans were up for the challenge and no one in the gym was surprised to see the match go the full three sets with each team beating the other 25-21 in the first two sets. The decisive set found both teams determined and exhausted after a long day in the gym, but the Spartans have trained hard all season for final sets and had a little farther to reach down than the Eagles and built a quick and insurmountable lead before closing out the match 15-9 to wrap up third place in a strong tournament. Senior Outside Hitters Emma Heimerl, Sydney Stensgard, and Eliana Lanik (who served 100%) led the offense with 70 kills, as Junior Abby Hepper doled out 85 assists for the weekend. Junior Brynn Rogers was outstanding on serve receive with 2.38 on a 3.0 passing scale, while fellow Nuggets Junior Molly Stein and Bella Studer dug 100% of the balls hit at them. Sophomore Lauren Tuccitto continued the solid play she has brought all season with timely aces and robust defense in the right back position. Senior Middle Hitters Tiwaah Danso and Jackie Stickler faced some huge middle blockers which limited their offensive production, but both scored when we really needed it and combined for 18 important shut down blocks along with Sophomore Right Side Acheampomaah Danso. All in all, a great day for the Spartans.