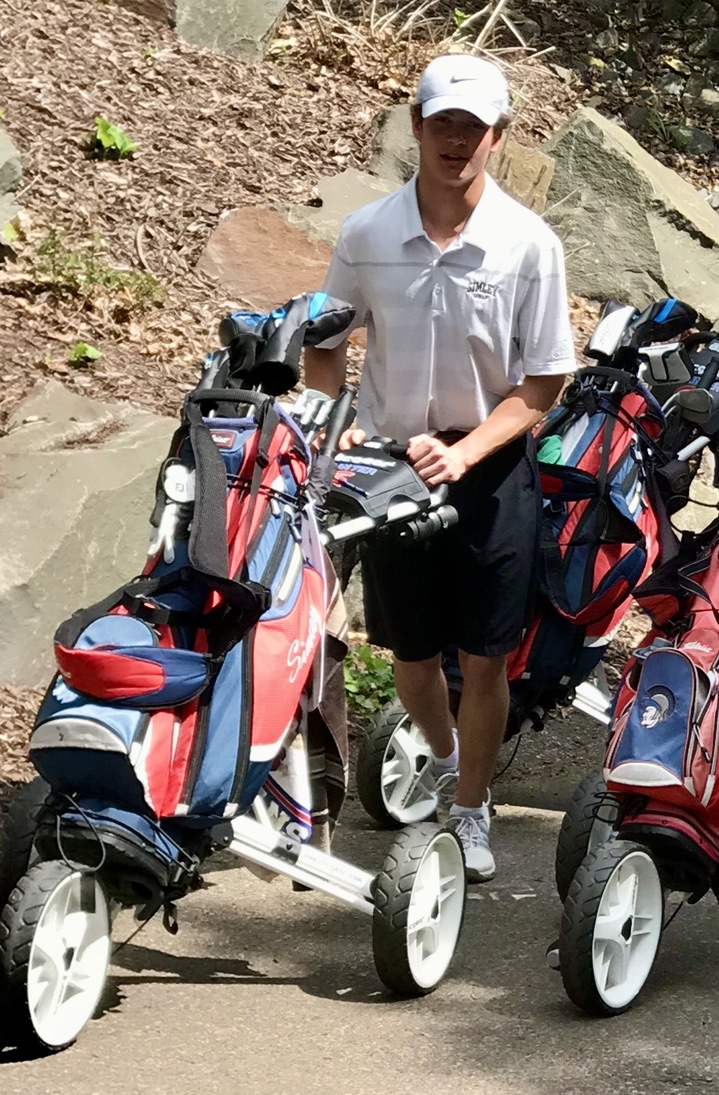 It was time for Simley Boys golf to play a “big kids” golf course when the team traveled out of state to Troy Burne Golf Club just south of Hudson, Wisconsin, and compete in the Hudson Invitational on Monday, April 26th. The one hole on Troy Burne that might be considered comfortable for the players (the 8th – a short par 4) featured a front pin tucked behind a dastardly pot bunker that made it impossible to get the ball close to the hole as the short approach shot was with a strong wind. The other seventeen holes on this Tom Lehman track require accurate shots by every club in your bag. In addition, the greens have significant elevation changes so that even a solid shot may end up on the wrong side of a hump leaving a very challenging two-putt. The Spartans came to play this day, however, and finished in the top five in a fifteen-team field, which included defeating Metro East opponents Mahtomedi and Tartan. Senior Zach Painter was blazing early in the round, at one point getting to two-under par before the course exacted a bit of revenge, and finished second in the Invite behind only an even par round by a Hudson golfer who recently committed to play for the Gophers. Junior Josh Painter and Sophomore Joey Stanton both shot strong 84’s in horrible conditions that could have easily been in the 70’s had a couple of putts not burned the edges of the cups and one bad hole been avoided. Sophomore Caden Renslow posted the final score for the Spartans securing 5th place. Senior Zach Soule and Freshman Justin Orn rounded out the scoring for Simley. The hallowed head coach is firmly convinced the boys golf team has rounded a bend and is entering the Metro East Mid-Conference tournament ready to make a splash.