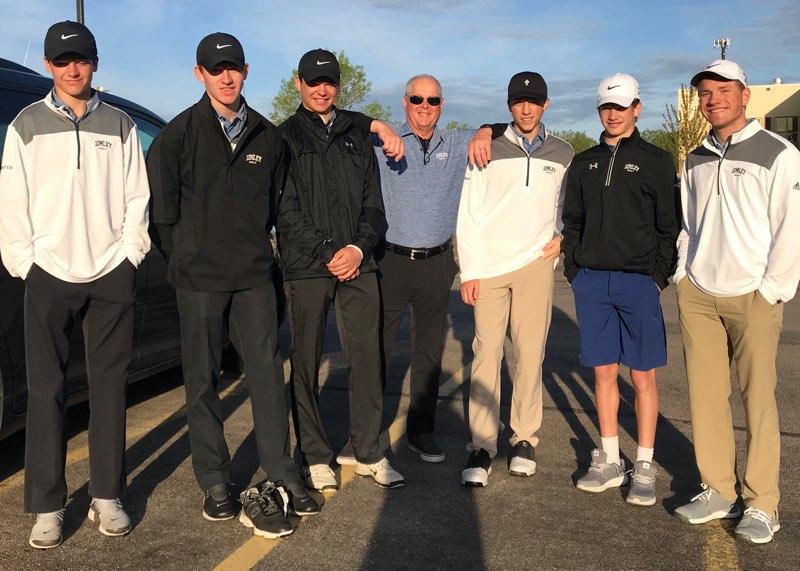 The Simley Boys Golf team travelled the short distance to Mendakota Country Club to take on powerful St. Thomas (1st in the conference) and annually strong Hill-Murray who were trailing the Spartans by only a few points in the standings. The challenging front nine at Mendakota threw everything it had at the Spartans resulting in three putts, multiple balls in the water, several out of bounds drives, the most difficult approach shots in the conference rota. Every Simley golfer had at least one opportunity to throw in the towel, but the Spartans reached deep, continued to peg it up, and refused to quit. Battling shot after shot after shot at a venue where historically Simley struggles, the Spartans fought back until the last putt of the day and while St. Thomas could not be defeated on their home track (STA was led by a four under par 32), Hill-Murray was vanquished by a single stroke. Mature beyond their years and playing for each other, Junior Ben Borchard and Freshman Zach Painter shot matching 40’s to garner two valuable points for the Spartans. Seniors Evan Schultz and Jamie Warrick and 8th Grader Josh Painter hung in for 41’s and Senior James Royce had the hole of the day with a bomb, a dart, and putt in the heart on his opening hole for an eagle.