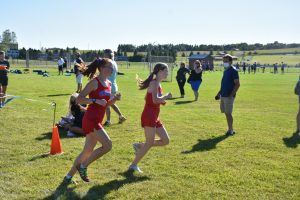 Highlighting a competitive conference-only season, the Metro East Conference Championships concluded yesterday with strong performances across the board. While the girls lost in the Session 2 Results in a tie-breaker to Hastings, in the overall combined results they improved two spots from the Preview to finish in 3rd with 94pts, one point ahead of Hastings and four ahead of Hill-Murray, who had each both narrowly beaten the Spartans earlier this season. The girls were aided by having all seven girls race together for the first time this season, including the season-opening performance of Ana Alvear, whose 5th place team performance was enough for the girls to move up. It was the second highest finish for the girls in program history. Brekken Grathen earned All-Conference honors with her highest ever Conference finish in 7th place. Abi Lindquist earned her second Honorable Mention CC honors with a 16th place finish, while Crystal Bonilla Rios and Julia Myers just missed earning Honorable Mention honors. For Grathen, it was her 3rd All-Conference performance and she is only the 2nd runner in program history to earn this honor at least three times.

For the boys it was a similar story, finishing 3rd in a tight race within their session, losing to Tartan by 2 points and losing the tie-breaker to Hastings, but beating Hastings in the overall results and finishing just a few points shy of Tartan to take 5th place overall as a squad. This ties their finish from two years ago and is believed to be only the 2nd time since 1981 that they have finished that high in the Conference. Kaiden Schrandt earned his first All-Conference honor with a 14th place finish, while Gabe Alvear and Nathan Schauer earned All-Honorable Mention with 17th and 23rd place respective finishes.

Both squads will race Thursday at Valleywood Golf Course at the Section 3AA Championships.